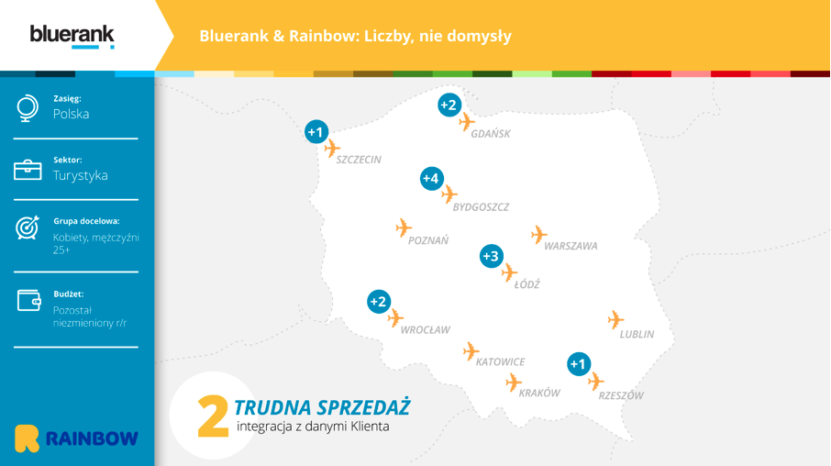 Budget allocation varied based on the effectiveness of each traffic channel, and reallocation decisions were made by Rainbow based on the Data-Driven conversion attribution model.

During the period under review, the online budget was allocated to AdWords activities (search, GDN, video), display, including programmatic, as well as social ads and email marketing.

Rainbow is the second largest tour operator in Poland. Bluerank has been a business partner of the company for the past ten years, coordinating its activities in AdWords, programmatic and social ads channels, and, for the past year, also in the personalization of display activities under the Hitspot Media brand. Jointly executed campaigns for Rainbow promote tour and staycation offerings to more than 250 destinations around the world.

Our goal for 2016/2017. was to integrate as many data sources as possible, process them and use them to optimize campaigns and media budgets. At the same time, we developed technology for broadcasting personalized 1-to-1 creatives, based on the individual preferences of potential Rainbow customers.

2. A 40% increase in total online revenue, as measured by Google Analytics, with a 20% increase in media budget, thanks to budget allocation based on the attribution model.

3. Increase in profitability (ROAS) of paid campaigns thanks to advanced personalization of advertising activities, among other things.

We wanted to find out whether media budgets allocated to different traffic sources are allocated in an effective way. In addition to a rational approach, the client appreciated the ability to reallocate funds. For this purpose, we used DoubleClick technology, whose server (Campaign Manager) allows to create conversion attribution models based on data and uses machine learning. We used a combination of Google Tag Manager and DoubleClick Search, which allowed us to automatically track all types of traffic to the site in a way that was independent of service providers. This model also served us to effectively manage budgets in AdWords campaigns and contributed to an increase in the number of online transactions by nearly 50% with only less than 20% more expenditures.

We researched that users are more likely to book seats if they know that the departure airport is close to their location. We prepared a tour feed by airport, and within each departure point, Rainbow assigned weights to individual tours related to the priority of their promotion. The system checked the user’s location, selected the offer with the nearest airport departure for broadcast, and at the same time adjusted the capping and budget according to the priority. It was the most effective campaign in terms of supporting online sales.

Together with Hitspot Media (a brand owned by Bluerank), we developed and implemented a mechanism that, using the dynamic creative capabilities in DoubleClick Studio, presented personalized ads to selected users based on two mechanics:

1. DMP system, using information about user behavior on the R site.pl through collaborative filtering and machine learning, it automatically selected the tours for which a given user had the best chance of converting.

The result was a campaign that “on the fly” assembled creatives depending on the attributes of the offer viewed by the user. 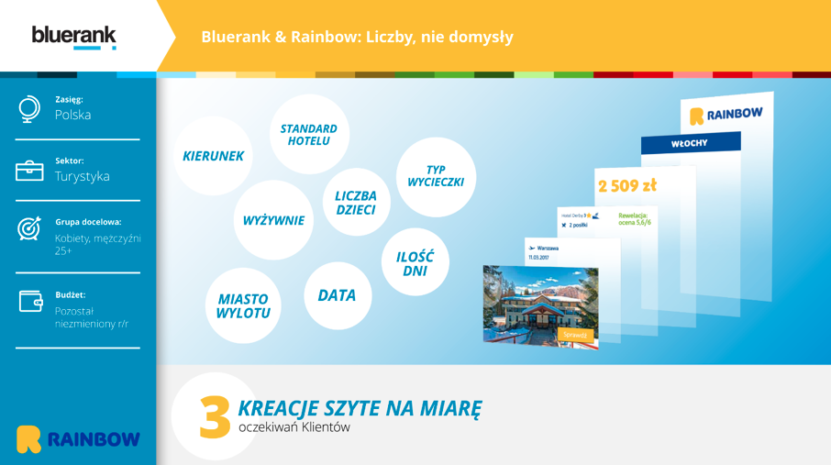 1. Increased online revenue (as measured by Google Analytics) from all traffic sources by 50% year-on-year, while increasing online budget by 21%.

2. Increase ROAS from paid campaigns by 271 percentage points. Online revenue from these campaigns increased by as much as 103% year-on-year.

3. Increase conversion rate by 43% with Hitspot Media personalization compared to standard dynamic remarketing. Programmatic activities are the channel that supports online sales the most. In addition, they build a positive relationship between customers and the brand through ads tailored to their preferences, presenting offers that meet their needs in a non-intrusive and non-intrusive way. For Rainbow, they also provide a way to effectively manage last-minute seat sales, minimizing the risk of rising costs.